Show us your EDC gear

Posts that don't fit into any other category. If it's anything to do with guns, it probably doesn't belong here!
Post Reply
53 posts

The knives apart my favourite is the Fisher Millenium. Good choice!

The ITP AAA titanium is good too. Check out the newer steel AAA's, they are really good. Of course the titanium versions are lighter.
Top

yeah XM 24 is the newly acquired one, as posted in the other threads. But Umnumzaan is also a superb knife . a tough contender for my pocket space.
All prices are available online

Rajat: thanks, the guarantee is awesome ,already made use of it, dropped the pen and spoilt the tip. Got it exchanged with no questions asked.
ITP is a fairly good value for money deal, plus no doubt Ti reduces the weight considerably . And what i had read there is no other technical difference between the steel and the Ti version
Top

choombak
One of Us (Nirvana)

yeah XM 24 is the newly acquired one, as posted in the other threads. But Umnumzaan is also a superb knife . a tough contender for my pocket space.
All prices are available online

Rajat: thanks, the guarantee is awesome ,already made use of it, dropped the pen and spoilt the tip. Got it exchanged with no questions asked.
ITP is a fairly good value for money deal, plus no doubt Ti reduces the weight considerably . And what i had read there is no other technical difference between the steel and the Ti version

How easy/difficult is it to open the Umn? The slim profile may make it difficult for single handed opening by pressing against the stud. Also, which method is easy - flicking it open, or opening it with the thumb on the stud all the way? I have moved away from thumb-stud designs, and prefer thumb holes instead (the stud can come apart, the hole cannot!) - nah, just preference in opening. I do like CRK designs though.

Rahul, Fisher makes some of the most high tech writing instruments. Did you ever wonder why it is called the "Fisher space pen"? It is because thsi is the pen that goes on board all NASA space expeditions. The refill is pressurized and will write even when you write with the pen upside down. It will also write in extreme weather conditions even sub zero temperatures or when wet.

The interesting part is that none of the money that went into the development of this pen came from NASA, all research was sponsored by Fisher it self and the result was such that NASA ultimately adopted it for their missions.

Secondly, the pen that you own "the Millennium" has a lifetime warranty. This is including the ink. The warranty states that the pen will never run out of ink or need another refill for the lifetime of the original owner. If it does you get another pen: Free. It will write for, I think, 30 miles before needing another refill and this based on their calculations is much more than an average person will write in a lifetime.

On another note since when did people who EDC a Hinderer or a Reeves think about "money deals", I guess it is an obsession to own the best! Now do you get my point about the Steel AAA

Ok, that apart the ITP is a good flashlight in its category.
Top

Choombak : Thanks. Initially the opening was extremely hard for single hand opening with just the thumb stud, due indent on the blade and the ceramic ball . I checked the various forums and adjusted the pivot very minutely so now its extremely smooth to open single hand with just the thumb stud all the way. Everyone advised me against flicking it as i was told it affected the lock up bar on the long run. There is a small trick also , you have to avoid touching the lock up bar while opening. just a little practice and its as quick to deploy as any other knife

Rajat: yeah i am familiar with history of fisher pens. But i was under the impression that NASA funded the research , there is a joke also that NASA spent millions of dollars and the Russians just took a pencil

Millenium is an awesome pen > been using it for more then 4 years( the current one after the exchange is 3 years old). I also have the model which was used in the first space flight. The best part is as you mentioned it can be used at any angle.
Actually you right bout the obsession with owning the best. Since somebody was coming from the US at a short notice i did not put in much research on the AAA flashlight but very happy with the buy. I have a fascination for Titanium . Why do you feel the steel ones are better? Any other recommendations in the AAA segment?
Top

Rahul: Yes, I heard the story about the Russians too. Sounds Practical and makes the Americans look like extravagant idiots

But although I knew the facts earlier I just researched to get some solid material on this and the result was fruitful. See:

" Uses in the U.S. and Russian space programs

A common urban legend states that, faced with the fact that ball-point pens will not write in zero-gravity, NASA spent a large amount of money to develop a pen that would write in the conditions experienced during spaceflight (the result purportedly being the Fisher Space Pen), while the Soviet Union took the simpler (and cheaper) route of just using pencils.[1] This story is in fact not true, as the development of the Fisher Space Pen was done independently of NASA, using private funds, and only sold to NASA (and the Soviet Union) after it was completed.
Russian cosmonauts used pencils, and grease pencils on plastic slates until also adopting a space pen in 1969 with a purchase of 100 units for use on all future missions.[2] NASA programs previously used pencils (for example a 1965 order of mechanical pencils[3]) but because of the substantial dangers that broken-off pencil tips and graphite dust pose in zero gravity to electronics and the flammable nature of the wood present in pencils[3] a better solution was needed. NASA never approached Paul Fisher to develop a pen, nor did Fisher receive any government funding for the pen's development. Fisher invented it independently, and then asked NASA to try it. After the introduction of the AG7 Space Pen, both the American and Soviet (later Russian) space agencies adopted it."

So jokes apart we now know the facts.

Flashlights: Do not get me wrong. There is nothing wrong with Titanium flashlights. Its just that I like a couple of steel ones and I think you will not blame me for it. Check out:

http://www.truenorthknives.com/vcom/pro ... ts_id=2720 (actually this is a AA but I think is available in AAA too)

The reason I like the steel flashlights is because of the look of the lights in this metal and because after a long time of use, since the material is tougher, there is less wear and tear and they look comparatively newer. Although its just the designing part but i like the clean lines of the Jetbeam, although I do not really like this manufacturer in general.
Top

I heard better reviews of ITP as compared to fenix LD01. Some how due to my fascination for this wonder metal titanium SS doesn't fancy me much. Maybe once after some more practical experience might shift to SS.
Any inputs on Titanium inputs illuminati?
Top

Although I really do not recommend it (buying a blade made out of Titanium) but since you seem to be fascinated by Titanium check this out:

Interesting isn't it! There are others too in Titanium but this seems better.
Top

Priyan
One of Us (Nirvana)

are you not use cellphone ?

Can't afford a cellphone currently as I have to pay for internet. My parents are old minded and doesn't really like me using internet. AFAIK their dislike for internet is due to a lot of negative views presented by mass media in our State. I'm working part-time as a typist, I hope soon I'd be able to afford one.
When I'll get to shoot a gun?
Top

nice but same here would never go for a Ti Blade.Actually didnt even know if they were making blades in Ti. Handles are great but not blade
Top

Priyan wrote: I hope soon I'd be able to afford one.

I am using cellphone since 1 year..
I brought it after joining Degree college...

choombak
One of Us (Nirvana) 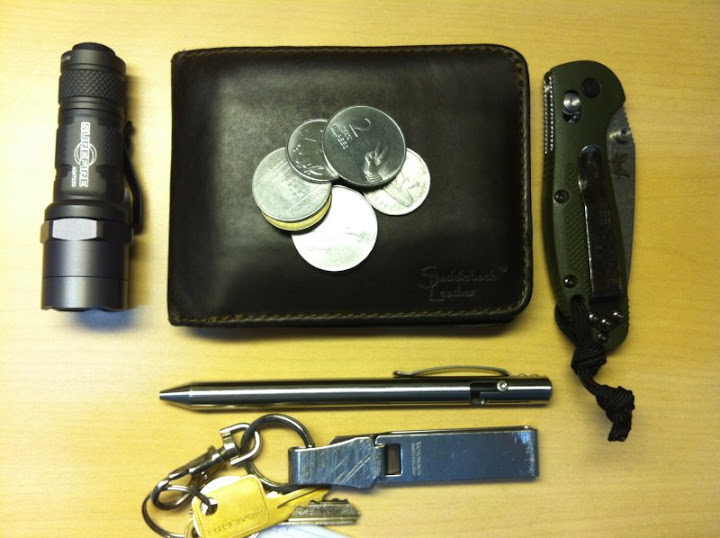 This is my EDC bag pack to work and back, I have two offices, one in the city and one outside, while travelling towards the city I mostly ride my motorcycle due to insane traffic.
In the bag;
safety gloves, first aid kit, couple of pocket knives, pens, digi vernier calipers, cologne, instant tea mix, water bottle, flares, measuring tape, sun glasses,ibuprofen, alka seltzer, clear glasses (for riding at night, I dont use a full face helmet), pre-workout booster, cigs, flashlight, snack bars, ear phones.

Not in pic, leatherman multitool, lunchbox and couple of apples.
Top

Hi mundiare,
I work as a design engg for wind turbine manufacturer, I have to primarily work with lot of welding guys to build test equipment, and fiberglass composites structures hence the safety gloves, calipers and measuring tape. I usually carry two knives, the inexpensive one is for marking and scraping fiber glass composites and also to loan it to others, the nice one is the one I use.
Top
Post Reply
53 posts