Posts that don't fit into any other category. If it's anything to do with guns, it probably doesn't belong here!
Post Reply
7 posts • Page 1 of 1 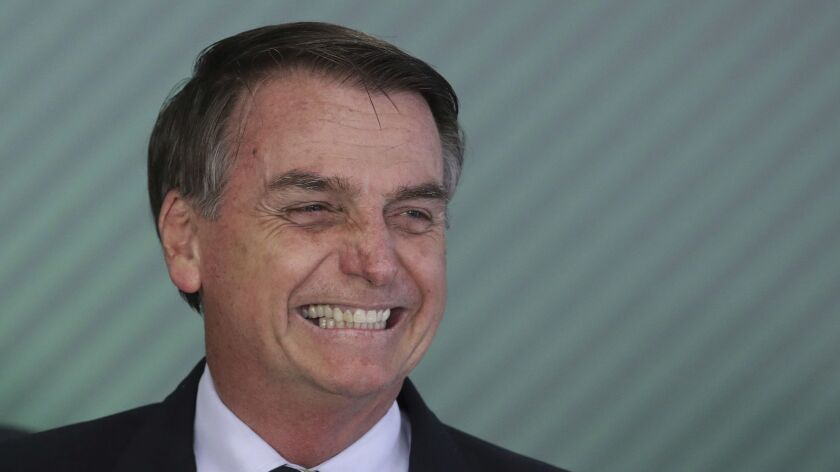 President Jair Bolsonaro signed an executive order Tuesday making it easier for Brazilians to own guns, swiftly fulfilling a campaign promise that he insists will help combat violent crime and reduce the number of homicides nationwide, which approached the 64,000 mark in 2017.

“What I can say, with great satisfaction, is that I have signed this decree, created by many good people, so that good citizens can, immediately, have peace in their own homes,” said Bolsonaro, who took office this month, at a ceremony at the presidential palace.

The order, which loosens restrictions on the rights of permit holders to have multiple firearms in their homes or businesses, is seen as the first step toward legalizing permits to carry weapons in public places, another promise the far-right former army captain made during his campaign.

In his edict, Bolsonaro, whose supporters often wear clothing with images of automatic weapons and bullets, made several changes to Brazil’s 2003 Statute of Disarmament.

Previously, people applying for a gun permit were required to provide a reason for needing one, a rule Bolsonaro said was too subjective and left many without recourse if their request was denied. Now, firearms will be available, through an exemption, to urban residents of states with a homicide rate of 10 per 100,000 residents — which currently includes all Brazilian states — as well as rural residents who have difficulty accessing help from police.

Those who own a commercial or industrial business or work in public security posts, including police officers, military personnel and prison guards, both active and retired, will also be given automatic approval to own guns. Collectors, hunters and those who participate in shooting sports were included on the list too but will continue to register their guns with the army, while firearms intended for personal protection are to be registered with the federal police.

Bolsonaro repeatedly said during the election campaign that “good citizens” would make the country safer if they had guns to fight back against criminals. And he reiterated during his first postelection interview that police should be able to kill suspects without consequence.

“Statistics show that when the number of acts of resistance carried out by the military police goes up, violence goes down in the region where they took place,” he told an interviewer on Record TV, without providing any statistics. “More than safeguarding someone’s life, firearms safeguard the freedom of a people.”

“If there were three or four armed people here now I’d be certain that some crazy person wouldn’t be able to come in through that door and do something bad,” he also told the interviewer.

Many Brazilians aren’t so sure. According to a December poll conducted by the independent polling firm Datafolha, 61% of Brazilians agreed that the possession of firearms should be prohibited because it represents a threat to the lives of others.

Those opposed to the changes say easier access to firearms will only lead to even more widespread gun violence.

“Loosening gun ownership laws will allow more firearms to enter into circulation in a society that already shows violent behavior very much built around the existence and availability of firearms,” said Ivan Marques, executive director of Instituto Sou da Paz, a nonprofit that works to reduce violence in Brazil. “We’re against the loosening of these laws so that Brazilian society is not inundated with more firearms. We have a serious gun control problem and a serious problem with gun violence. We don’t need more guns to resolve this problem.”

The latest data from the nonprofit Brazilian Forum on Public Security registered 63,880 intentional violent deaths in Brazil in 2017, up 2.9% over the previous year. In that same year, police seized 119,484 guns.

According to a 2018 study by the Institute of Applied Economic Research, or Ipea, firearms caused 71.1% of the homicides in Brazil in 2016. It also noted that for every 1% increase in the number of guns in circulation, the rate of homicides increases 2%.

Pro-gun activists counter that the loosening of laws will better protect citizens from armed robberies and other violent crimes while also helping to deter crime.

“The idea of giving citizens access to firearms is to permit the act of extreme self-defense, particularly when the state has failed to do so, when the state has shown it isn’t capable of providing proper public security at all times,” said Fabricio Rebelo, a criminal attorney and public security researcher who was the director of the pro-gun Viva Brazil Movement from 2010 to 2015.

On the other hand, a 2016 study of gun violence in Brazil conducted by the Latin American Social Sciences Institute, or FLACSO, shows a markedly slower increase in the rate of homicides caused by guns after the disarmament statute took effect. Between 1980 and 2003, homicide-by-firearm incidents increased 8.1% annually. From 2003, when the Statute of Disarmament was enacted, growth slowed to 2.2% a year.

Those who have guns for personal protection will now be required to renew their registration every 10 years instead of five. Gun owners with children, teenagers or people with mental disabilities in their homes will be required to pledge to store their weapons in a locked safe or otherwise secure area.

Langlois is a special correspondent.

SMJ wrote: ↑
Thu Nov 21, 2019 3:27 pm
Completely dislike this guy and his anti environmental policies but at least he got this right

Completely agree. Detestable character but this is not a bad decision.
It ain’t over ’til it’s over! "Rocky,Rocky,Rocky....."
Top

The police patrolling the Favelas of Rio are decked up with hitech stuff more suited to a SWAT team. And we’re talking NORMAL coppers. That’s one wild country by itself
''It dont mean a thing, if it aint got that zing!''

eljefe wrote: ↑
Mon Jan 13, 2020 5:20 pm
The police patrolling the Favelas of Rio are decked up with hitech stuff more suited to a SWAT team. And we’re talking NORMAL coppers. That’s one wild country by itself

i be in Brasil favelas as tourist its real shithole!
Top

Rings true in the case of India as well, where the criminal justice system is on the verge of total collapse.