We have just had a discussion about the safety of the IOF revolver, or lack thereof.

It has been stated that it is safe to carry the IOF revolver with a round in the chamber under the hammer.

It is not and seven years ago, a tragic accident almost happened to one of our members because he had a live round under the hammer.

You can read all about it here:

It can happen, it has happened, and it can happen to anyone - even you!

If you scroll down in that thread, you will see that I wrote a lengthy explanation about how a double action revolver works, and why this accident can happen. I'm going to write another explanation here, because even for folks who don't want to take the time to look at the earlier thread, the safety issue of the IOF revolver is so critical that we here at IFG want everyone to understand the risk of this gun.

An early Belgian pioneer gun designer and manufacturer, Charles-François Galand https://en.wikipedia.org/wiki/Charles-François_Galand developed a double action revolver about the same time that Colt in the USA came out with its famous Single Action Army "six-shooter". Among other innovations, Galand introduced a new way to provide spring pressure for the trigger and connecting hand mechanism. (The "hand" is the part that moves upward and turns the cylinder of the revolver.) Here's a picture of the Galand revolver's lockwork. Click on these pictures to make them larger: 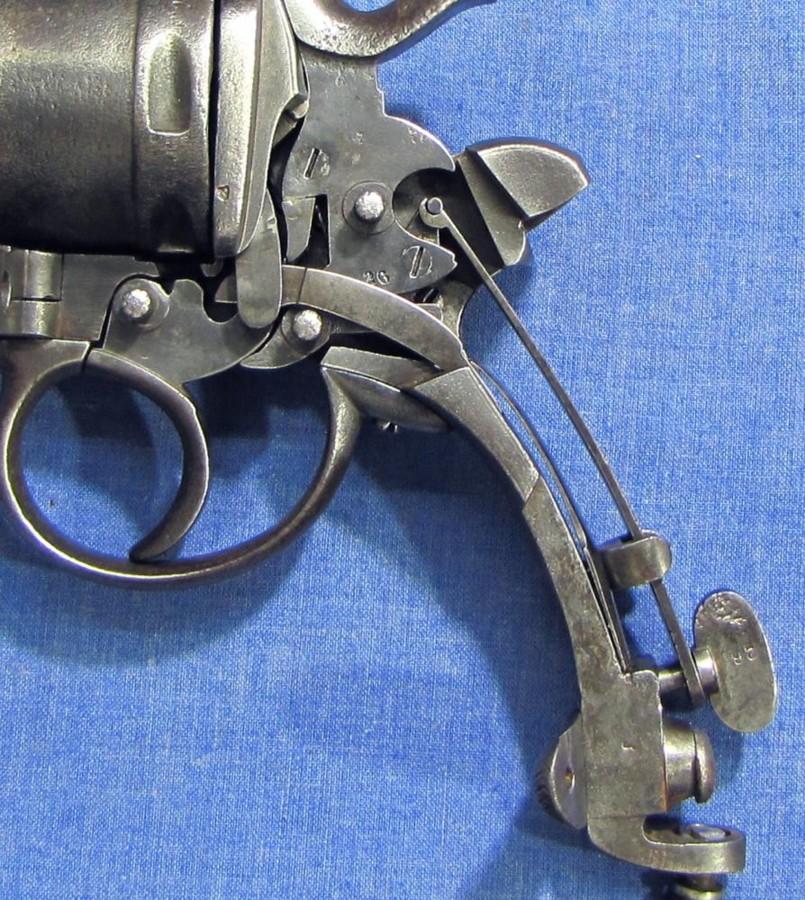 This diagram will help explain what you are seeing: 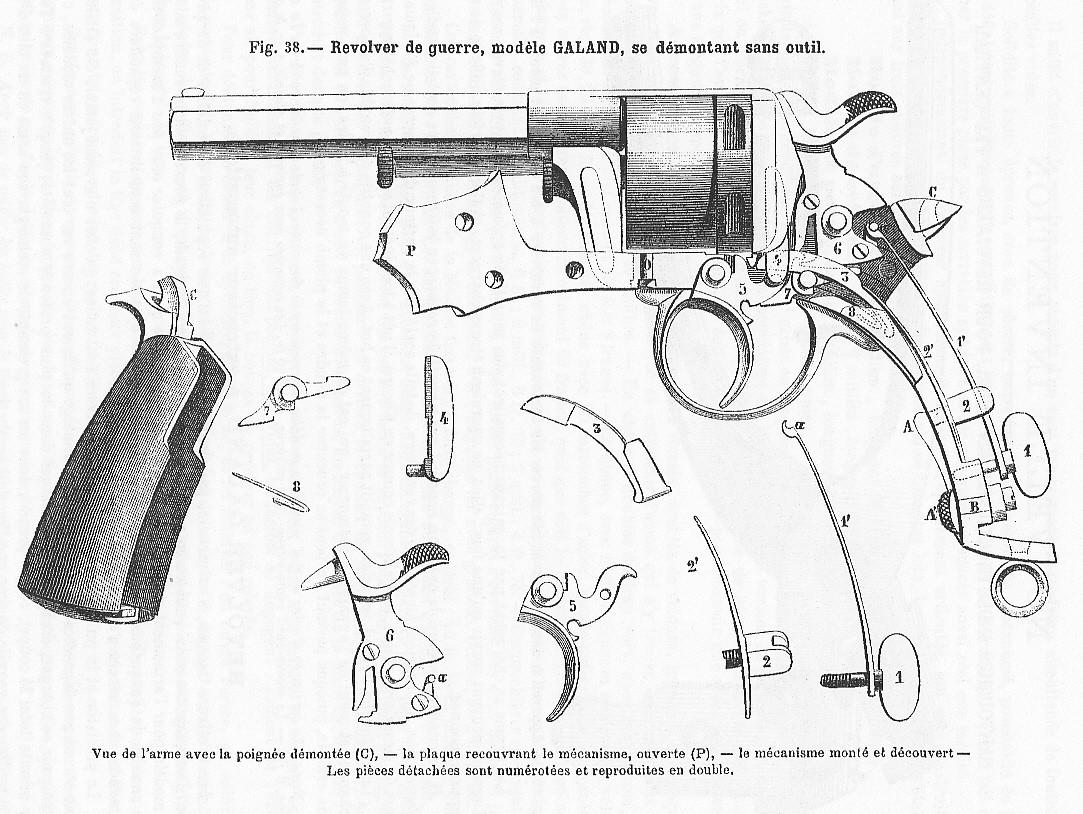 In the diagram, you will see lever 3 resting on the junction where the hand, 4 connects to the trigger, 5, by a pin. The lever pushes the trigger back to its normal position and retracts the hand by the pressure of the spring, 2'.

Then, in 1882 Col. Rudolf Schmidt of the Swiss Army designed another ground-breaking revolver, using and building on the Galand principle. (This Col. Schmidt is the same man who designed the famous Schmidt-Rubin straight-pull bolt action Swiss Army rifles beginning with the Model 1889, along with Col. Rubin, who designed the innovative 7.5 mm Swiss cartridge.) The lockwork of the 1882 Swiss Army revolver https://en.wikipedia.org/wiki/Revolver_1882,_1882/1929 and its derivatives are said to use the Schmidt-Galand Action. All of the Colt double action revolvers from 1905 until the sixties, including the famous Python and Diamondback models, use this Schmidt-Galand Action (but with modifications, as we will discuss later). 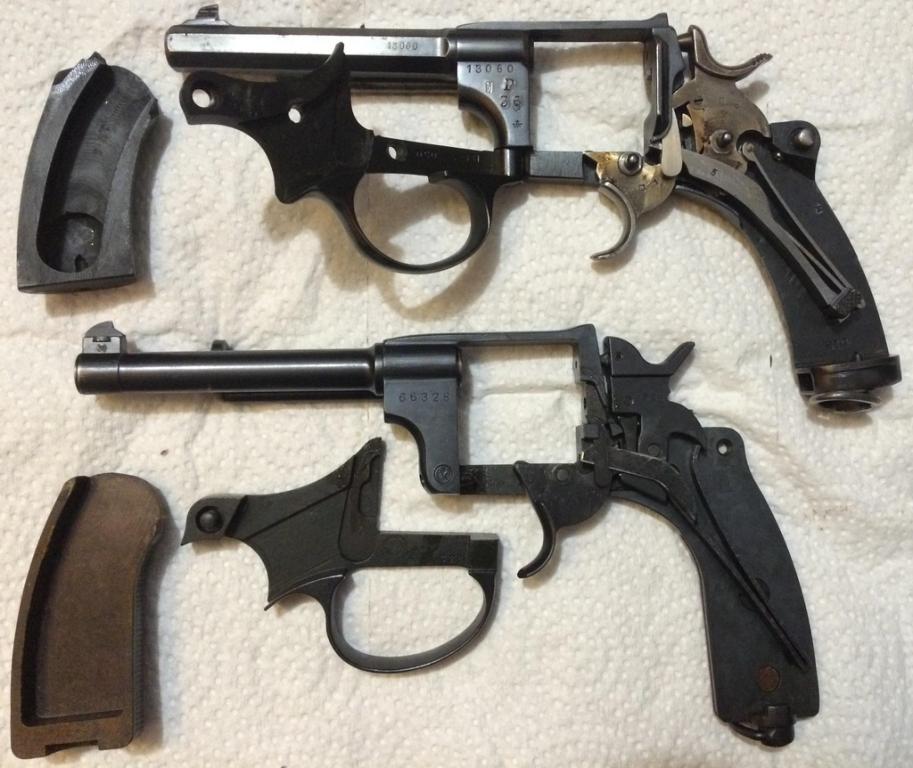 The 1882/1929 version was a modification that simplified the revolver, and made it cheaper to manufacture. However, I'm including it here because, while working according to the same 1882 Schmidt-Galand system, it is easier to see its operation in simplified form.

Here is a close-up picture of the 1882 lockwork: 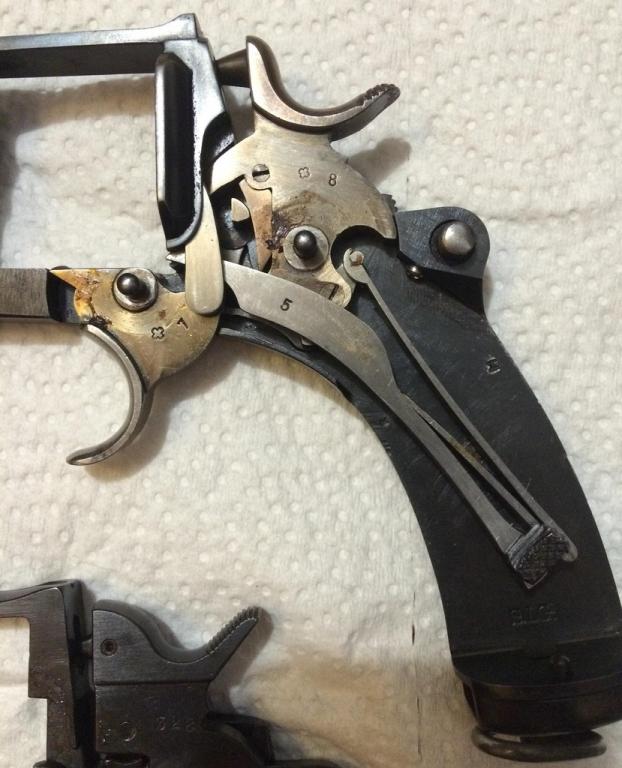 Here is a picture of the 1882 lock parts disassembled: 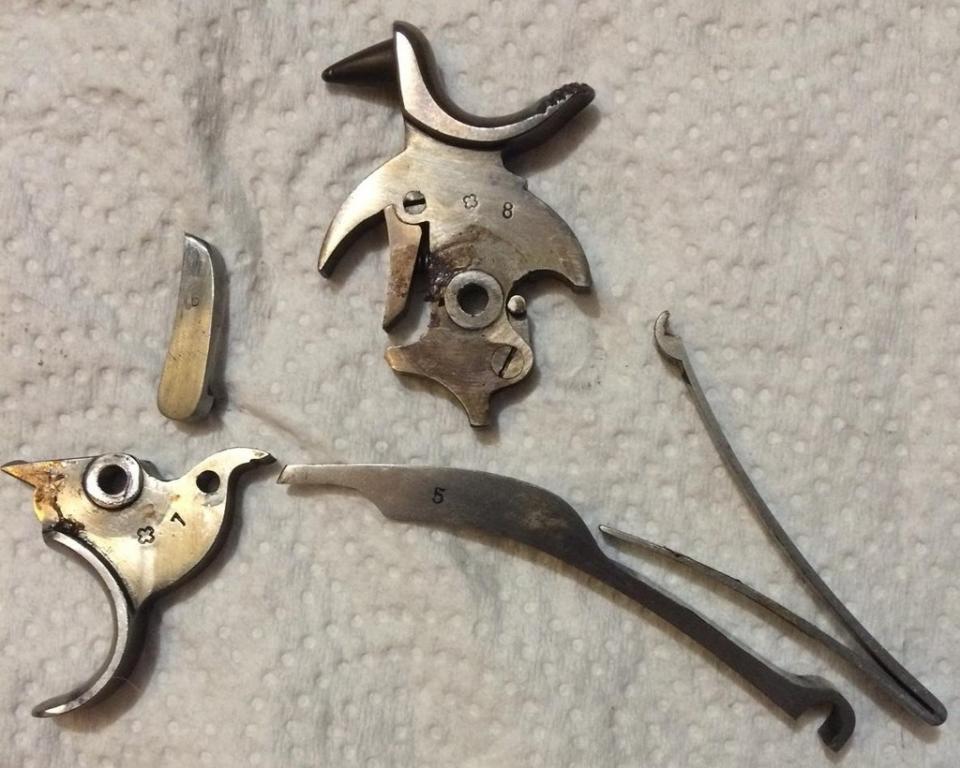 In these pictures, you can see how Col. Schmidt took Galand's principle and made the trigger lever into a rebound lever (part 5 in the picture). This rebound lever still pushes the trigger and hand back to its normal position, but this time, under pressure from another arm of the hammer mainspring, rather than Galand's separate spring. 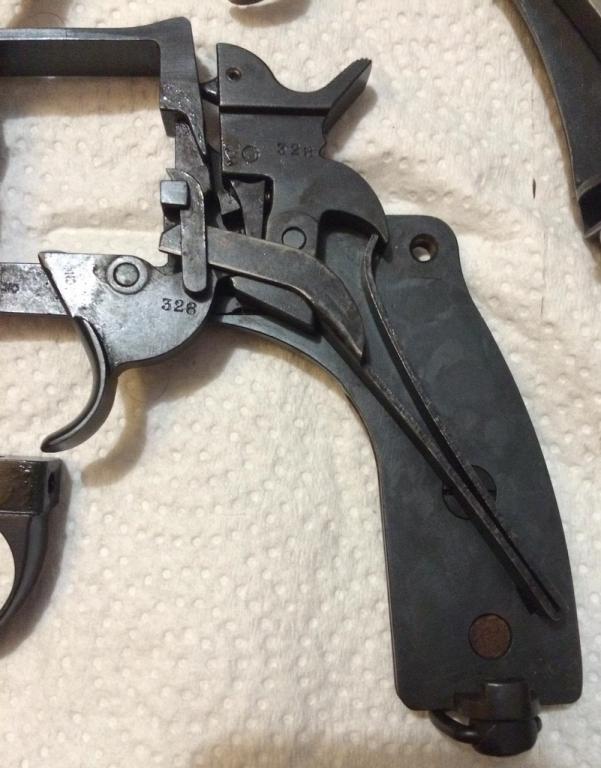 And here are the lock parts, disassembled: 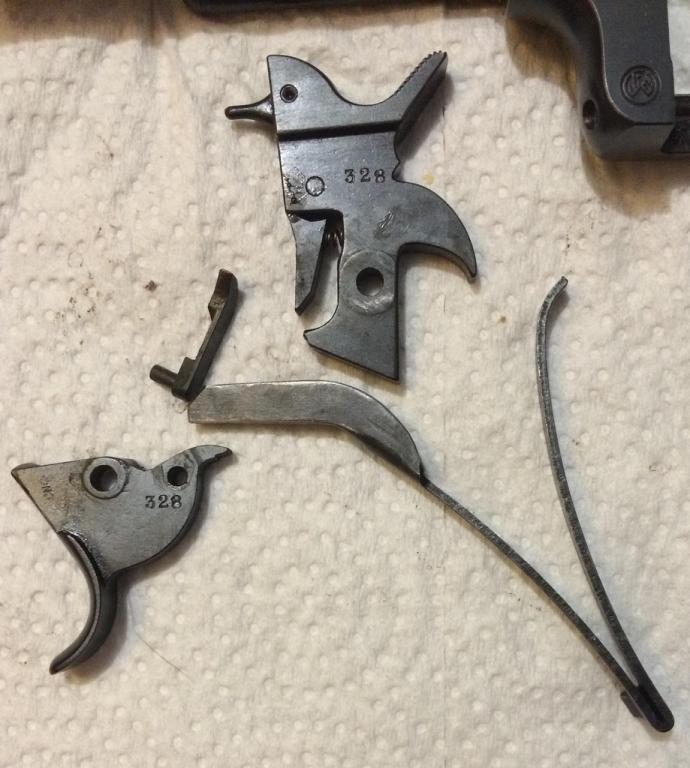 You can see how all of these parts have been simplified to make manufacturing easier and cheaper, yet the same operation is still obtained. This is very interesting, and you can consider it. But for the purposes of our discussion, note that the protuberance at the bottom of the trigger is still maintained, though as part of a straight, perpendicular surface.

The rebound lever is even more modified and simplified. It has been combined with the lower wing of the "V" type mainspring. Then, the part of the rebound lever that passes beside the hammer and goes forward to press the trigger and hand back to normal is simply a section of the mainspring wing that is pressed into a right angle to the rest of the wing-rebound lever.

Here, the unbent portion of the wing-rebound lever still presses against the protuberance at the bottom of the hammer, causing the hammer to rebound from the firing position when the trigger is released and the rebound lever moves downward.

The Webley and IOF action

Now, what does this have to do with the IOF revolver? It is made on the pattern of the original line of British Webley, Webley and Scottt, and Enfield revolvers and service revolvers, which work on the same Schmidt-Galand Action system which I've tried to describe above. Look at this picture (which I posted in the thread from seven years ago) shows clearly the Schmidt-Galand lockwork of the Webley: 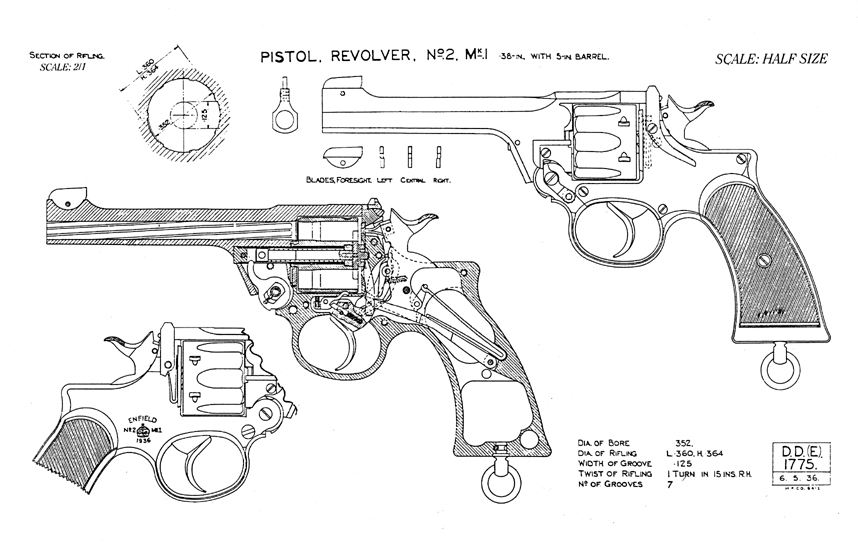 Here is a picture of the Webley/IOF action cocked: 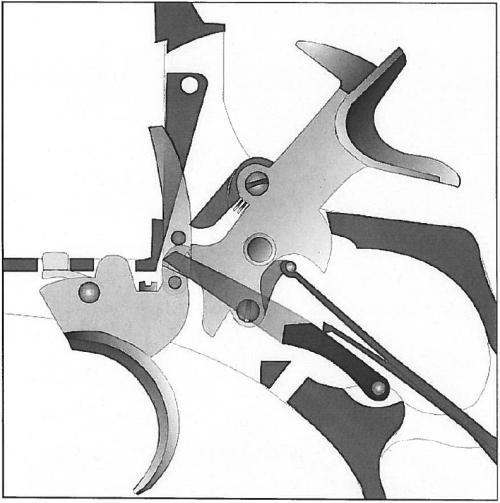 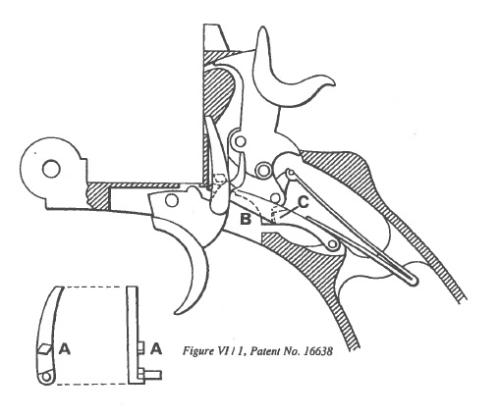 The Problem with the IOF Revolver

The problem with the IOF that is hard to see in these pictures and diagrams is that the angle of the ridge on the rebound lever and the angle of the protuberance on the bottom of the hammer is such that, in order to make it work, does not positively prevent the hammer from moving forward under the force of a sharp blow!. You may not be able to push the hammer forward in its rebounded position, but you cannot push as hard as a drop striking the hammer spur on a hard surface will, as shown in the example in the thread linked at the top of the page.

This may be counter-intuitive! You may think, 'I am strong; I can push just as hard or harder than a dropped gun can strike the hammer,' but you cannot!

The angle of the rebound lever to the hammer's protuberance will allow the hammer to fall under the force of a sharp blow. (Incidentally, this principle, under the name of the "Blish principle", is the theory behind the action used in the Thompson submachine gun, or "Tommy gun".)

This is why you cannot safely load the chamber under the hammer in an IOF revolver.

Now, why are Colts and other revolvers safe, where the IOF is not? Colt shares Schmidt-Galand operation with the IOF. Why can I carry a Colt (one that's equipped with the positive lock feature) with all chambers loaded, when I cannot do so with an IOF safely?

Here is a picture of a Colt New Service revolver that has the Colt positive lock feature:

For the following discussion, I suggest that you load the large version of this diagram available here: https://upload.wikimedia.org/wikipedia/ ... iagram.jpg This will help you to see the parts to which I'm going discuss next.

The key part of this picture is part 30, which blocks the hammer from falling from the rebound position to the fired position. The little square section at the top of the block rests between the frame of the gun and the part of the hammer just below the firing pin. There is no way that any blow can crush this solid piece of steel. The spur of the hammer will break long before the frame of the gun does. So, it is safe to carry all chambers loaded in a Colt.

But how does the block work?

This technology, as I said earlier, is over 115 years old. It isn't rocket science, and the patent has long since expired. There is no reason on earth that IOF could not have incorporated it in its revolver, rather than the clumsy and useless safety they did include.

Other guns, such as the Smith and Wesson, have included a similar feature since after World War 2. It works a different way, but prevents the firing pin from contacting a round in the chamber under the hammer unless the trigger is pulled, also. So, this technology is "only" 70 years old, but apparently beyond the understanding or abilities of IOF, even at the exorbitant price they charge for their revolver, which is many times higher than Smith & Wesson's products.

Ruger has a different lockwork that positively prevents the hammer from striking the firing pin when the trigger is not pulled back, which depends upon a transfer bar. Many other double action revolvers have safety provisions that work by various methods. But IOR revolvers do not have this provision.

Some may observe, "timmy, you've written a lot here, and nobody will read it, so what was the point of your writing it?"

Well, I hope that at least a few will read this. Even if only one person is saved from a grievous accident, it will have been worth it. IFG will have done its duty (as it has in the past) of ensuring its members safety, and that of others who may be browsing and come across this article.

However, we cannot "foolproof" the world from anyone. Those who remain convinced otherwise, will do what they do, and we can't help that.

Also, maybe there is a gun lover in our ranks who reads this and appreciates the fine design and thinking of guns, like me. Maybe someone will be encouraged to think of guns as a beautiful expression of human design, as I do, and marvel over the intricacy and cleverness of some of them!
“The principle of self defense, even involving weapons and bloodshed, has never been condemned, even by Gandhi.” - Martin Luther King, Jr.

Timmy, thanks for the informative post. I guess another way to carry the IOF revolver with all 6 chambers loaded would be to cut off the hammer spur and fabricate a hammer shroud.
Of all tyrannies, a tyranny exercised for the good of its victims may be the most oppressive. It may be better to live under robber barons than under omnipotent moral busybodies. The robber baron's cruelty may sometimes sleep, his cupidity may at some point be satiated; but those who torment us for our own good will torment us without end, for they do so with the approval of their consciences.
Top

Thanks a lot timmy. I keep two chambers empty. Your explanation is almost completely lucid , although I intend to read it again and again.
Top

Thank you very much for this very detailed and educational post.I will read it a few times.
It ain’t over ’til it’s over! "Rocky,Rocky,Rocky....."
Top
Post Reply
4 posts • Page 1 of 1