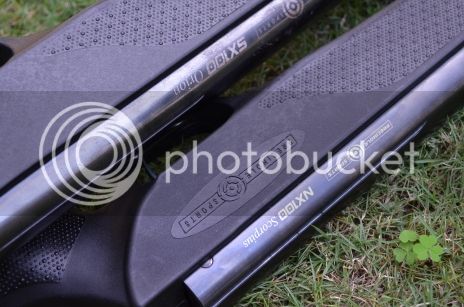 So, i dropped my new gas-ram rifle from the table, and broke it's front plastic sights, so got an excuse to install the scope on it. also, if you notice in the picture below, I also removed the rear sights, have to do something about tat muzzle now:

Cocking is much much easier on the NX100 gas ram than it is on the SX100 springer; I did not have to "slap open" the break barrel to load, just "cracked" the NX100 open. :p

Loading is also a pleasure, you can feel a resistance (it's smooth) while closing the barrel shut after cocking it, unlike with the springers, where one has more or less 'free-play'.

Cocking does not need much pressure in the NX100.

Shooting is equally loud, but I did feel that the NX100 has lesser vibration... MAYBE.

The dovetail grooves are evidently deeper than my SX100's, you may be able to note the same in one of the pictures above.

I didn't have too many good pellets (I use MasterShot wadcutters with my SX100) to shoot before i broke the front sights, and haven't yet zeroed the scope.

I shot about 20 pellets at a target, as the NX100 rifle's 1st shots and they were scattered all over the target. maybe it was the gun breaking in, or the odd pellets, or just me.

Will update once I get myself to shoot some more with it. Maybe others can bail me out here.

A member asked me to post pictures of the disassembled parts of the NX100.... ummm... I don't think so! :p
chitty-vitty, bang-shang
Top

Noticable, there is no barrel droop in NX 100 .

Basu wrote:Noticable, there is no barrel droop in NX 100 .

Was there one on the SX100, or is it visible in the pictures? I never noticed it on my Orion, its quite accurate nonetheless.
chitty-vitty, bang-shang
Top

najad
On the way to nirvana

Najad,
the best I can do brother!

Basu wrote:Noticable, there is no barrel droop in NX 100 .

Was there one on the SX100, or is it visible in the pictures?
I never noticed it on my Orion, its quite accurate nonetheless.

Hi Supershaji,
> Welcome to the world of "Nitro Pistons"

> Yes! Shooting a NP-AR is smooth & enjoyable - don't worry the gun will settle soon - the problem is the quality of pellets...
> The more sophisticated an AR gets the better quality of pellets it demands - When I use RWS & GSmith pellets a 1/4" group at 30ft is the done thing

> If you are using a scope no need for front & rear sights - don't bother to fix them...
> BARREL DROOP - Every break-barrel AR produced in the world except PCPs has some sort of droop - depends on how miniscule the angle is - Using a scope solves it!!!
Happy Shooting....
Briha
Top

Shukriya once again for your input and motivation!

I shall try to get my hands on some better quality pellets (I do feel that the MasterShot wad cutter pellets are consistent though) and shoot again.

Two questions for you:

I know you have a Muzzle Brake on one of your ARs; how does it effect accuracy and general performance practically?
Does a Nitro-Piston / Gas Ram AR demand an 'Air Rifle Scope' only?
chitty-vitty, bang-shang
Top

Shukriya once again for your input and motivation!
I shall try to get my hands on some better quality pellets (I do feel that the MasterShot wad cutter pellets are consistent though) and shoot again.

Two questions for you:
I know you have a Muzzle Brake on one of your ARs; how does it effect accuracy and general performance practically?
Does a Nitro-Piston / Gas Ram AR demand an 'Air Rifle Scope' only?

Hi supershaji,
Q: Muzzle Brake- how does it effect accuracy and general performance practically?
Ans: Muzzle Break indirectly contributes to better shooting (maintain accuracy) by providing a 'ballast' ( a counter weight) that gives balance while aiming. It helps the pellet to maintain a straight flight path by dispersing the compressed air prior to the exit of the pellet from the barrel - in fact the pellet exits into an ambient atmosphere rather than a disturbed one.

Ans:It's preferable to go for a AR rated scope - Compared to the Springer the Nitro Piston minimizes vibration to a great extent - but still an AR rated scope is a better bet - don't take a chance by fitting a non-AR rated scope.

Also while the cocking of a Nitro Piston is far smoother than a Springer - The added length of the Muzzle Brake makes cocking even more smoother.
Briha
Top

Dear all , I have been shooting with Precihole (.177 spring piston) and target results are excellent. This is really a 'value for money' product.
Dr.S.M.Parvez.
You do not have the required permissions to view the files attached to this post.
Last edited by hajismp on Mon Feb 24, 2014 9:27 pm, edited 3 times in total.
Top

Little tip from what I learnt : When firing a spring-piston gun the hit will be below the actual point of aim, as when piston hit the barrel opening, it dips the gun. ADJUSTING sights won't work because whatever new point of aim will be, it will be dipped down. So, only solution is that aim little higher. Correct me if I am wrong, although I strongly believe I'm not.
Top

I get similar groupings from both my NX100 as well as the older SX100 with G Smith pellets.

Thanks dear for compliments.
Top

Dear Dr Parvez,
The groupings are very very nice that too with Pegesus.
I guess , had you used Club version of Precihole, result could have been even better.
Happy shooting........

Good pics and nice reviews , i am contemplating on buying one please advise which model is best on the website there are 3 models each for nitro & springer .

also advise the cost and where to get a quote
Top

I get my pellets from relish Sports (Crosman Premier and Hollow Point). They are efficient and trustworthy.
You can pick up a tin or two from them.

Briha ji,
1000 ++ shots is about average for a springer to break in (in general); not to sure of the avg. for a NP. Could you shed some light on this is you can?

BD
The early bird gets the worm, but the fact is, if the worm had woken up late, it would still be alive.
Top
Post Reply
39 posts