Just before I was to leave for my winter hols I got a bunch of pics from Steve Pope of V-Mach.

The pics you will see shows a custom built Weihrauch HW77K.

This rifle was first customised as a Venom Lazaglide Target Trophy. In years to come the Target Trophy stock was then swapped for a Venom Vantage stock. Finally, the present owner decided to send it to V-Mach for a complete refurbishment (reblue, stock polish and engraving) and new internals such as main-spring, piston washer, breech seal, etc.

When the rifle was sent to Steve, he remarked that someone had done a pretty amateurish oil finish on the Vantage stock and there was only so much he could do to regain its past glory.

I will let the pictures speak for themselves. Enjoy.

Steve's pics of the refurbished rifle. 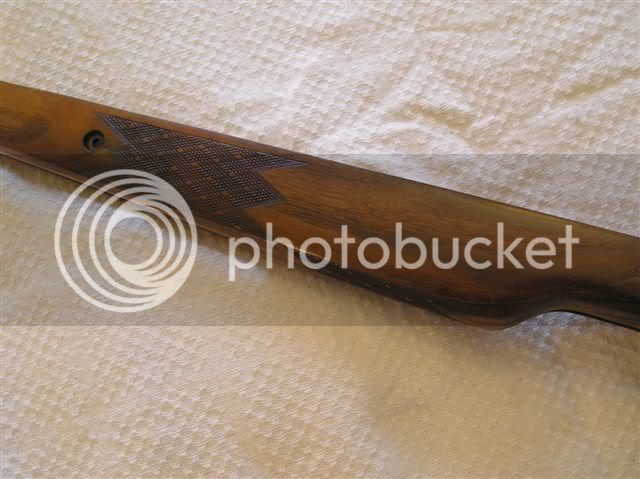 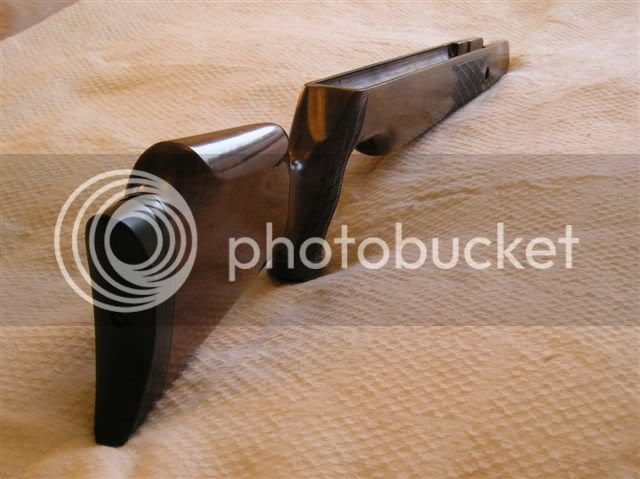 Please do not ask me what it cost as I am not at liberty to mention that. However, if you are interested you could contact Steve Pope at [email protected]

Lloyd
Fresh on the boat

As usual Steve has done a fantastic job. So pleased that he has continued in Venom's fine traditions. Nice bloke too

Mack The Knife is this the same rifle you were talking about on your trip to Delhi?

My congratulations to the owner of this fine piece!

Cruel man, you revived some memories there!

I did have a matching HW80K. You should remember because I sold it to you to buy the Air Arms Pro Sport with a walnut stock. You sold it on to Richard on the BBS and as far as I know it is still his prized air-rifle.

That's the rifle I had gone to buy when I had to walk back from the train station because I did not even have enough left for the bus fare.

So pleased that he has continued in Venom's fine traditions.

My exact sentiments as well and long may it remain so. Amen!

I am very sure the pics do not do it justice. I have seen Venom bluing and it is as deep as the deep blue sea.

Lloyd's mention of the old Venom and their HW80K reminded me of something I have never shared on the net.

Back when Venom was still Venom Arms Co. based at Gun Barrel Industrial Centre, Hayseech, my brother and I made the trek to collect my Venom Maglaza '80k.

On reaching the shop (21st June 1995 - there are some dates one never forgets), Ivan Hancock was wrapping up for the day and after chronoing the 80k in my presence, he left the shot. Whilst I had spoken with Steve Pope from Bombay, he wasn't in either and so it was Steve's father, Dave, who played host to us and so it was with Dave that I corresponded until his retirement.

A few months after returning to India, I decided to make a proper case for my beloved '80k and set about designing it.

I was such a clueless wonder in those days that I would remove the scope after each session and so made a seperate section for it.

However, I was pretty chuffed with my efforts and promptly sent Dave a copy of my drawing via snail-mail.

In the interim Venom Arms became Venomac and shifted to new premises. However, the drawing finally made it to Dave and herewith his reply: 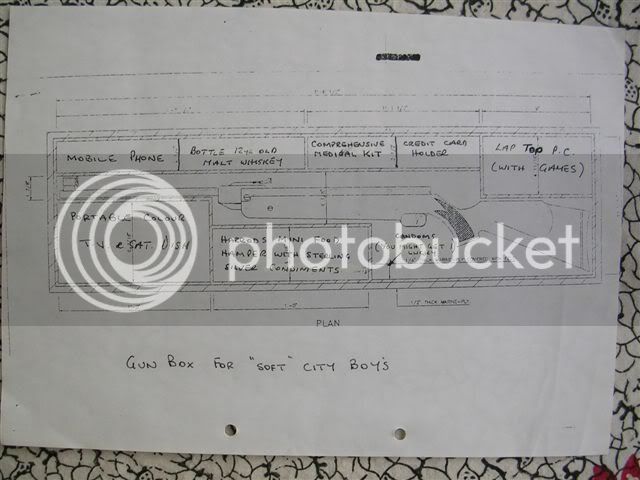 Firstly, you are one passionate man and it amazes me to see the expressions of that.

The pictures are amazing and on any day I will be proud to have one.You are giving me new thoughts.

Thank you, Vikram. There are very few who can even begin to imagine what I have had to go through to realise some of my desires.

Come over to the dark side and don't listen to a word of Rasputin's advice.

P.S.: Say, would you like to pay Steve Pope a visit and do a story for IFG? Okay, for me.

I could introduce you to Steve or set it up for you.

P.P.S.: Incidentally, this was the rifle you were supposed to bring down for me.
Top

Ranjeet Singh
One of Us (Nirvana)

I echo Vikram's words and Gentlemen out there, Mack The Knife has actually lent me a gun case, now I know how much has gone into it..


Thank You Mack The Knife

Which reminds me, I better put you in touch with Lloyd. Will do it now.

Both. I made a second case.

BTW, that was Steve's dad, Dave, who sent me those revised drawings.

Somehow I missed this one. Apologies.I would love to meet him and do a report for IFG.
You don't say! Was/is this gun still yours? Do you want this gun brought to India.Let me know.

Somehow I missed this one. Apologies.I would love to meet him and do a report for IFG.
Vikram

I hope other members would join in the chorus and push our itinerant moderator-gunwriter to do one mroe fine report!

Was/is this gun still yours? Do you want this gun brought to India.Let me know.

Yes, this rifle used to belong to me and was the one I wanted you to bring back. However, when you mentioned that you had to bring one back for S and your cousin as well, I backed out and gifted it to a good friend - got fed up of waiting and besides which I already have a couple whilst the other two have diddly squat. Three airguns in one visit would have been taking the piss.

What really mattered was your unsolicited offer to bring one back. Thanks!

Apologies.I would love to meet him and do a report for IFG.

You have Steve's details. However, if you like, I could request him on your behalf.