A posts related to self defence/ home defence. Please post anything related to legal aspects in the 'Legal Eagle' section.
Post Reply
8 posts • Page 1 of 1 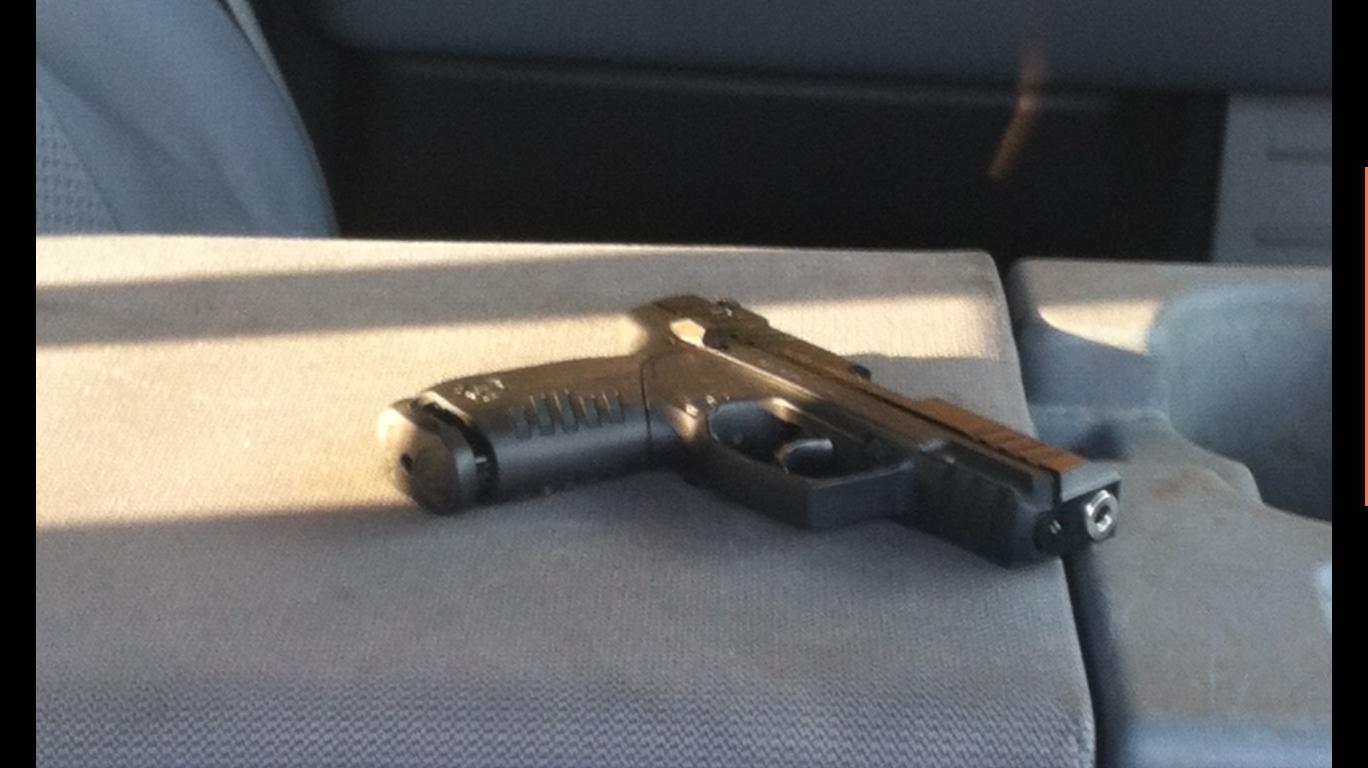 A neighbor from Wisconsin had a DGU in Racine. His family and mine were only a half mile apart in rural Wisconsin while he was growing up. That is a close neighbor in the area. I spoke to him over the phone about the incident. He disires anonymity.

On Thursday, July 14th, after getting off of work at 4 p.m., he drove his mother in law to a local Shopko to pick up a prescription. His son came along to do a little shopping. My former neighbor was driving a Ford crew-cab F150. He dropped off his mother in law and son, then drove to a spot a little away from other vehicles. There he could watch the doors for when his son and mother in law came out. This put him a bit closer to a plasma purchasing center than to the Shopco. It was 86 degrees and breezy, so both windows were open. He turned off the truck, and started to read his kindle.

Loud rap music alerted him to a vehicle two parking spots behind him. A quick glance in the mirror showed two black men in a beat up Toyota sedan. The passenger got out of the sedan and started to walk toward my neighbor's F150. The passenger was wearing a white, "wife beater" t-shirt. The driver had a skull cap on. My neighbor reached under the folded down console, retrieved a Ruger SR22, and rested it on top of the console, in his hand. It would not be visible unless you were looking in the window.

The driver of the Toyota pulled up to within six inches of the F150's driver's door, blocking that exit. As my neighbor saw the driver look past him, he turned to look to his passenger side window.

The Toyota's passenger had arrived there. As the passenger looked inside, through the open window, he saw the SR22 in my neighbor's hand. A forced grin appeared on his face, as he said, "hey.." and walked 15 feet in in front of the F150.

The Toyota driver drove forward, the passenger got back in, and they screeched out of the parking lot, onto the highway, heading toward a not so nice part of town.

The tag on the Toyota was an illegible paper dealer tag or a facsimile thereof.

My neighbor said that he had remained very calm throughout the 30 seconds that it took for this event to transpire. Then, as the adrenaline reaction set in, he started shaking. This is a common occurrence after a DGU.

He has a concealed carry permit and carries regularly. The SR22 belongs to his wife, who also has a CCW. It was in the truck because she works at a school, and cannot take it on school property, so that day it had been placed in the truck with him.

To show how far political correctness has driven us, when I asked for the descriptions of the Toyota's driver and passenger, he was hesitant to identify them as black. He did not wish to be accused of racism.

He would rather be in northern Wisconsin where he grew up, but you go where there is work.

I have no doubt that the Toyota driver and passenger intended to commit a nasty criminal act. You do not drive so close to a driver's door so as to block the exit in the normal course of events, while your partner approaches the passenger side.

Nothing was reported to the police. My former neighbor wanted to avoid problems. No crime had been committed.

The description of two slender black males of average height, one wearing a skull cap, the other a wife beater t-shirt, in a beat up and rusty Toyota sedan, is not very definitive.

Just another defensive display that almost certainly stopped a violent crime. Nothing for the news, here.

©2016 by Dean Weingarten: Permission to share is granted when this notice and link are included.
Gun Watch
[url]http://gunwatch.blogspot.com/[url]

I realize this article has little to do with India. But this forum has a good international perspective, so I thought it might be appreciated. If it is inappropriate, please let me know and I will refrain from such posts in the future.
Last edited by Dean Weingarten on Thu Jul 28, 2016 6:16 pm, edited 1 time in total.
Top

Dean Weingarten wrote:I realize this article has little to do with India. But this forum has a good international perspective, so I thought it might be appreciated. If it is ianppropriate, please let me know and I will refrain from such posts in the future.

Not only is it appropriate but it is very much appreciated and should be appreciated by those who live in countries with high crime rates. So please feel free to post more on the subject.

For what it's worth, I think your friend handled the 'defensive gun use' incident very well. Are Americans taught how to face such problems when applying for a carry permit?
Top

to_saptarshi
One of Us (Nirvana)

Thanks for sharing this Dean. I live in Wheeling and its not very far from Wisconsin. I have to agree , that it could have been lot worse unless your former neighbor was carrying that day. Its fact that most of the time defensive display is enough to save your life and prevent any undesired incidents.
This reminds me one incident in India about 10 years back , where one of my relative traveling with his family and were surrounded by a group of 8-10 people armed with Sticks , Axes and Swords in the middle of night , while driving through a jungle in Orissa in his personal car. They blocked the road with tree logs in order to commit an armed robbery. My relative has All India License and were carrying a Mauser HSC .32 ACP in his underarm holster . He stopped the car , saw the men approaching towards his car from 20-30 feet away. He asked his wife, who was sitting next to him in passenger seat, to grab the flashlight and focus it on him so that he can be visible in the dark. He opened the door stepped out of the car keeping the driver door open with the pistol in his hand pointing towards the ground then he moved little forward so that car headlight make him more visible . It take a while for them to understand whats going on and probably they really didn't expected him to came out of car and walking towards them, and soon they realized that he is holding a pistol in his hand, it was such a sudden surprise for them, that they didn't wasted a second the moment they saw it and they ran like hell in the middle of jungle. Everyone's face were covered with a piece of cloth and my relatives could not saw their faces. Later he told me he would have fired a warning shot in Air to make them realized that he is armed with real thing and ready to fire, but he is glad that he didn't had to go that far.
Thanks and Regards,
Saptarshi
Top

For what it's worth, I think your friend handled the 'defensive gun use' incident very well. Are Americans taught how to face such problems when applying for a carry permit?

Yes and no.
In the states that require some form of class before you are given a carry permit, the classes usually cover relevant laws.
If you have a good instructor, he might cover some scenarios that you could encounter but it isn't a requirement. Still, there is only so much that you can cover in a few hours.
You can, however, take classes on your own. There are plenty of outfits that offer further training.
“Never give in, never give in, never; never; never; never – in nothing, great or small, large or petty – never give in except to convictions of honor and good sense” — Winston Churchill, Oct 29, 1941
Top

That's a very relevant scenario anywhere in the world.

Why do we have display of arm prowess on republic day parades in India?
Why does Army carry out Armed drills in Disturbed areas?

Its all to do with Display of Strength which is an apt defense strategy IMHO.

For what it's worth, I think your friend handled the 'defensive gun use' incident very well. Are Americans taught how to face such problems when applying for a carry permit?

There are about 100 million armed Americans, so we have a strong self defense culture. Not all Americans are taught defensive tactics, but there has been a long tradition of tactics and gunfighting in the country.

In the last 50 years, a thriving literature of guns and self defense has flowered, first in print, now on the Internets. The blog that I am the main contributor for, Gun Watch, is one of hundreds that thrive in this culture. There are endless discussions on the "best" types of firearms and the "best" calibers.

Shooting incidents and self defence tactics generate after action discussions with considerable constructive criticism on what could have been done better, when.

There is an entire small industry that has developed teaching shooting and tactics in professional courses. Prices range from free to thousands of dollars for a week's intensive training. Police departments often offer introductory level training for free or for a small fee.

Separate issue: Is there a way to edit typos like the "ianppropriate" error?
Last edited by Dean Weingarten on Thu Jul 28, 2016 6:35 pm, edited 2 times in total.
Top

Thanks for the reply.